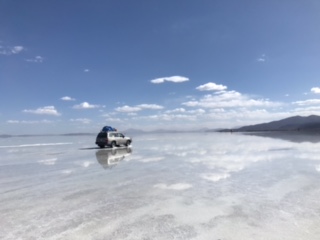 ~By: Amanda and Julie

When booking anything in a third world country you must take everything as “alternative facts”. Things get lost in translation, drivers veer off on personal agendas, and pictures on pamphlets rarely meet expectations. That being said, it’s almost always worth it and the experience will often exceed your expectations in ways you’d never comprehend.

A couple of weeks ago we were going through the extensive paperwork process of crossing by land from Peru to Bolivia as U.S. citizens. We booked a 3-Day Salt Flats tour from our hostel in La Paz and the only expectations we had were 3 meals a day and accommodations on the tour.  Beyond that, al

l we knew is we would see the Uyuni Salt Flats and we were promised pink flamingos.
We took an overnight bus from La Paz to Uyuni and arrived around 5am where a man with a sign appeared out of no where in the dark with our names, escorted us through the empty town to a tiny cafe for breakfast. It had spotty wifi but the breakfast was filling and most importantly a wall filled with outlets to charge everything we owned, since electricity would be scarce the next three days. We basked in the heat of the fire burning oven and drank copious amounts of coca tea to prepare ourselves for the journey with no seeming itinerary.

Around 10am a lady from the travel agency next door came to find us, escorted us to our 4×4 jeep and introduced us to our driver. He was less than pleased that we showed up for a three day trip with our large backpacks filled to the gills for an entire month of traveling. He had to tie our big backpacks to the top of the jeep; we hadn’t been informed to pack lightly or to leave our bigger bags behind. Julie explained to him our dilemma and after many under the breath remarks about packing gold bricks, he tied down our bags under a tarp on top of the jeep. Plan to leave your larger backpack behind, stashing everything you will need for the tour a day pack. Our simple packing list includes:

We all piled into the Nissan 4×4 with only a hint of our itinerary, we knew our first stop was the Cementerio de Trenes (the train cemetery). Expecting an hour drive, we were surprised when we pulled up 10 minutes later. Several rusting steal trains lay in the sand, like an abandoned children’s toy. Our driver warned us the structures were not exactly stable and to use caution. This did not stop us from exploding out of the jeep and running towards the trains like a bunch of 5 year olds who had just be released for recess. With a ‘Carpe Diem’ attitude we immediately threw caution to the wind and jumped on to the warm steal. Climbing the old trains was no easy task, however we were able to get several amazing pictures and laughs. Our 20 minute time allowance closed all too soon and we headed back to the jeep; next stop, the salt flats.

A couple of years ago I found a picture online captioned “where heaven meets earth”. I immediately clicked on the link and learned it was the Salar de Uyuni (the Salt Flats of Uyuni) located in Bolivia. My research began here, it would be a journey, but it was promptly moved to the top of my bucket list. As we headed out of town we spied hints of our impending destination, floating mountains and mirroring pools of water in the distance. Pulling into the salt flats, my heart skipped a beat… I had made it.

We scrambled outside, excited for our first view, ready for our feet to touch the sparkling white ground. This is where I believe our driver’s feelings for our group changed from unenthusiastic to the beginnings of a new friendship. He knew we were ready to fall in love with his country and now he was excited to show it. For our tour we had selected to only use a Spanish speaking local guide, an English speaking guide would have set us back an additional $75 each, definitely not in the budget. Luckily, Julie is perfectly fluent in Spanish and was able to translate the important information and facts. If no one in your group has a decent grasp on the Spanish language, I would recommend springing for the English guide.

Our first stop was a brief one, our guide knew we were itching to get our first experience inside the flats. He showed us where the clay underneath the salt flat was “breathing” as it bubbled up to create pools of water; it felt like we were on another planet in a far away galaxy. Our guide promised after lunch he would take us to the best locations on the flats to get those amazing pictures we had been planning for weeks, so we begrudgingly got back into the jeep.

We soon arrived at the hotel where we would have lunch, settled in the middle of the salt flats. It was an oasis surrounded by miles of white. The tour drivers bring and prepare all the food for the three day trip. So we clicked away with the Go Pro, while our new friend, Miguel, set up lunch. At this point the three year olds inside of us couldn’t help ourselves and Anna and I tried a bit of the salt; it was everything we hoped it would be. Julie still thinks we are weird. Inside we found our driver had spread out a feast, including llama steaks, a first for everyone. They are amazing and my taste buds compare it to a gamey steak.

Driving into the heart of the salt flats was just as it was captioned, straight into heaven. You are surrounded by pure white, the ground covered in salt which reflects off the sun like fairy dust. The entire 11,000 sq km flats is flanked by mountains which seem like a mirage in the distance. Once a prehistoric ocean which had dried up millions of years ago, the salt deposits are all that remains. During the rainy season in January enough water collects to create mirrored surface. It’s incredible the way the sun reflects off the mirror, unlike anything I had seen before.

Moving on to the dry part of the Salt Flats, it was time to take those crazy pictures. Armed with a Go Pro and an array of props you can use the flatness of the area to create an optical illusion in depth perception. I highly recommend when you plan your trip to utilize google to gather ideas and then bring toys and props to make amazing pictures you could not re-create anywhere else. We brought mini dinosaurs, a corona bottle and a Pringles can, which we danced out of. Use your imagination and get creative. Luckily our driver Miguel knew how to line up the props to create the best photos. Leaving the salt flats with brilliant memories and a slight sun burn (SPF or cover up) my soul was happy.

After a few words in Spanish, we talked Miguel into letting us plug his aux cord into our phones and run our music for a while. Cruising through the mountains we let the breeze whip through the windows as we captured pictures of gigantic cactus as the topography gradually changed.

We pulled into our hostel in San Juan around 5pm, the accommodations were basic and traditional. The walls and beds were made from salt and the roof was covered with straw. Afternoon tea was planned for 5:30 and we settled down to refresh with tea and cookies! Afterwards we were able to pay 10 BOB ($1.45) for a hot shower.  Having not bathed since La Paz and caked in salt, the hot shower lifted our spirits after the long day. Special note if you take this tour, this is likely your last chance at a shower for the next two days. So unless you want to be responsible for the funky smell in the jeep, scrub up!

Dinner was served around 7:30 and both nights included an appetizer of the traditional Bolivian soup. I wish I could duplicate this soup at home… I love soup. The hostel sold beer and wine, which if you know anything about us, its how we start and end the day. After a couple of bottles of red and taking the opportunity to gaze at the stars uninterrupted by light pollution, it was time for sleep.

CHECK OUT OUR VIDEO OF THE TRIP ON YOUTUBE!