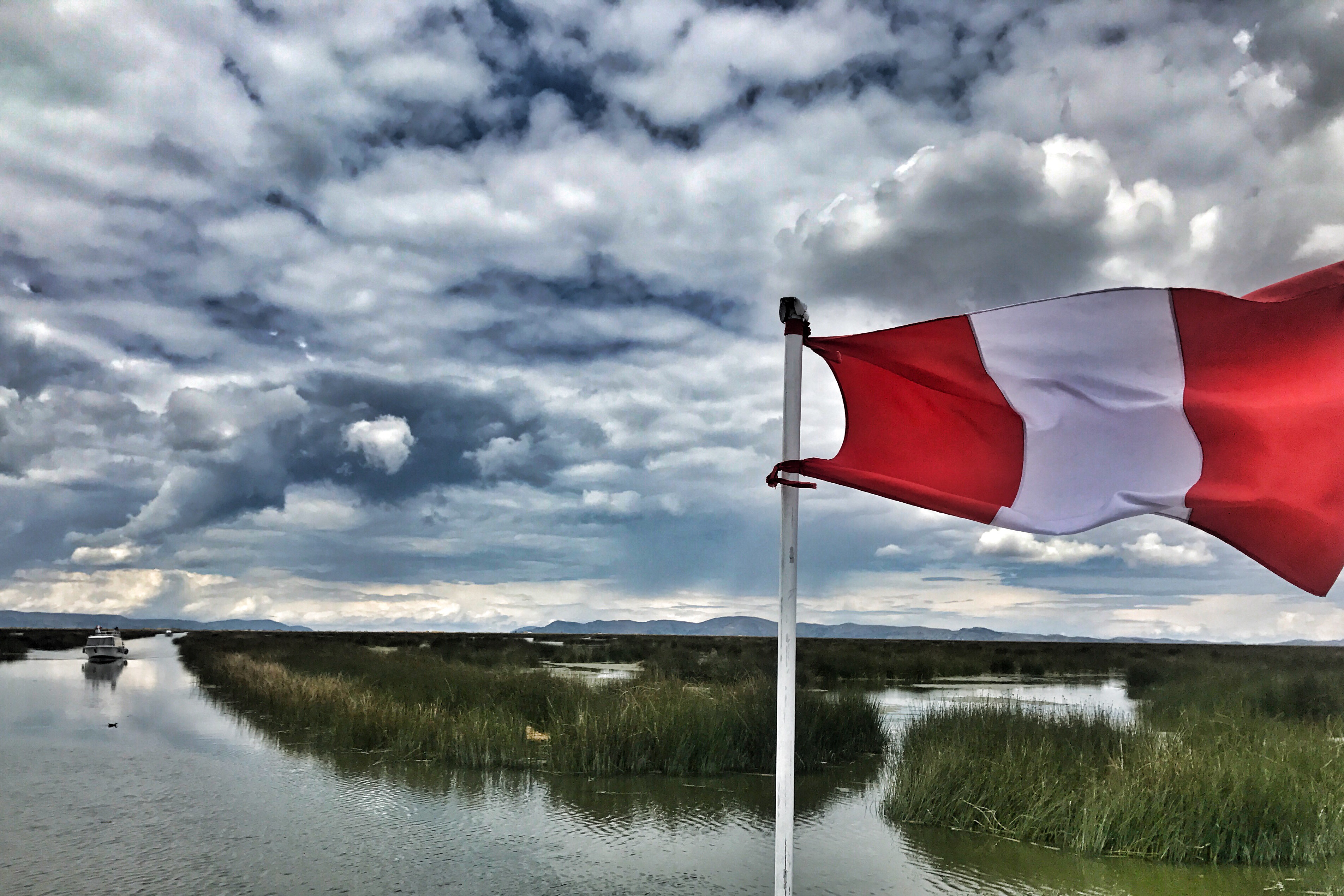 I’m kind of embarrassed to admit this but I’ll be honest… we only went to Lake Titicaca so that we could check in there. It was a bucket list place I’d wanted to check off ever since the name first gave me the giggles in middle school. The reports we were getting back from other travelers really weren’t that exciting however. We had just conquered Machu Picchu and were heading over by land to Bolivia; Lake Titicaca is sandwiched in the middle of two amazing destinations but with underwhelming feedback.
We arrived in Puno, Peru and had set aside two nights as we had some last minute errands to fulfill before crossing the Bolivian border. As Americans it’s much more difficult to cross and we were trying to have everything checked off the list to be extremely prepared after reading many horror stories and having to help our friend with his difficult entry at LaPaz airport a few days prior. We spent the day making copies of our itineraries, departure flights, passport copies, yellow fever vaccination cards, and hostel accommodations. Nothing is ever as easy as you would think. It honestly took an entire afternoon just to print all the documents for 4 girls. Meanwhile the electrical power in Puno was going in and out the entire time we were there, and luckily we were able to print off all our necessary copies before the electricity went out for good the rest of the night. After we finally completed all our errands we had time to book a tour the next day to explore the local area.

For 15 USD each, we booked a half day boat tour through our hostel to visit the Uros Indians. We had heard of the floating islands but we had no idea what was in store. We thought we booked an English-guided tour but as most things in South America… things aren’t as they seem. We started calling the entire trip the vacation of “alternative facts.” Long story short, I end up translating for the entire tour group. The Uros chief, called a President, explained in Uru how the islands were made and how they lived, then our guide would translate from Uru into Spanish and then I would translate into English and help answer everyone’s questions about the islands and the people.

So here’s what I learned from the President of the Uros: first they used to live in large reed boats that they jokingly like to call a “Mercedes-Benz,” on Lake Titicaca (pronounced ti-ti-kok) which means Puma Rock Lake. Turn a map of Lake Titicaca upside down and you can see a puma chasing a rabbit. They had whole extended families living in each boat, but because they liked to have so many kids, they needed to expand, hence building floating reed islands. They had to keep moving their islands to protect themselves from the Incas and the Spaniards but they kept their traditional lifestyles intact for centuries. Each island uses ten different anchors to keep it anchored on the Peruvian side of Titicaca so as not to float too far over to Bolivia. The Uros President laughed explaining, “Because we don’t have passports!” The islands grow these incredible reeds that they use not just as nutrition, but also to make rope, boats, medicines, beds, houses, and literally everything they have including the ground they walk on. Every 20-30 days they have to make a new layer of reed floor for the island because the reeds deteriorate and they would sink otherwise. There are over 40 islands and each reed island lasts approximately 30 years. The President explained to us that he is elected to represent his island and family for one year; his function is to maintain and organize their family islands. Presidents can either be male or female. There are 17 in total and one President overall to represent their indigenous tribe to the Peruvian government.

The Uros rarely get sick– they usually feel ill only 2-3 days and then get well again. Their old ancestors used to live over 120 years old but the President said that was because they lived so traditionally and subsisted mostly from fish fresh caught from the lake. There are currently about 80 varieties of fish in the lake but they are starting to rapidly disappear. The Uros mainly eat fish, birds, and rice, but now they don’t live as long. The President said that duck is their favorite– it’s “more delicious than chicken!” Given that the Uros mainly live from fishing the lake, the disappearance of native fish is harming their livelihood.

The most striking thing about the Uros that made the whole tour so memorable and spectacular is simply their incredibly happy attitude and welcoming spirit. The first word they taught us was Waliky– which means Welcome. They greeted us with beautiful smiles and colorful hand-made textiles to purchase. Tourism is a huge benefit to help them keep their existence. They now have solar panels to upkeep due to a visit from the President of Peru that left the president concerned for the death rate of children who accidentally asfixiated from smoke inhalation inside their homes. They lost four babies in a terrible tragedy. Now solar panels dot the islands in a gift from the Peruvian government to help them with a green energy source. However, the Uros have now bought more and have to pay for their upkeep.

The Uro boast that they never get cold because of their “black” blood and tough skin. We were able to go inside the homes and see the humble interiors. Just a bed and a few belongings. They spend most of their time outdoors, fishing, sewing, cooking and building the islands. Their entire lives are centered around a little handmade island built of reeds and it’s incredibly humbling seeing their simple means of subsistence; however, they are so open and inviting to their few visitors, that their smiles and joy and happiness was the greatest thing that we took away with us.

We had an incredible afternoon with them as they answered every ridiculous question that we had. The President, being such a huge soccer lover, was excited to talk sports with the other men on our tour. The men rowed us on one of their handmade “Mercedes-Benz” boats to another island where we could buy beer and even a fresh fish that they would cook for us on the spot as the women sang songs to us including the cutest version of “row your boat” I’ve ever heard. By far it was the best $15 I’ve ever spent. I highly recommend spending a day on Lake Titicaca. It exceeded all of our expectations by a long shot.

Check out our other awesome blogs about Peru:

Way Too Wanderlust recommends bringing your passport so you can get a floating island stamp!

One thought on “TITICACA”