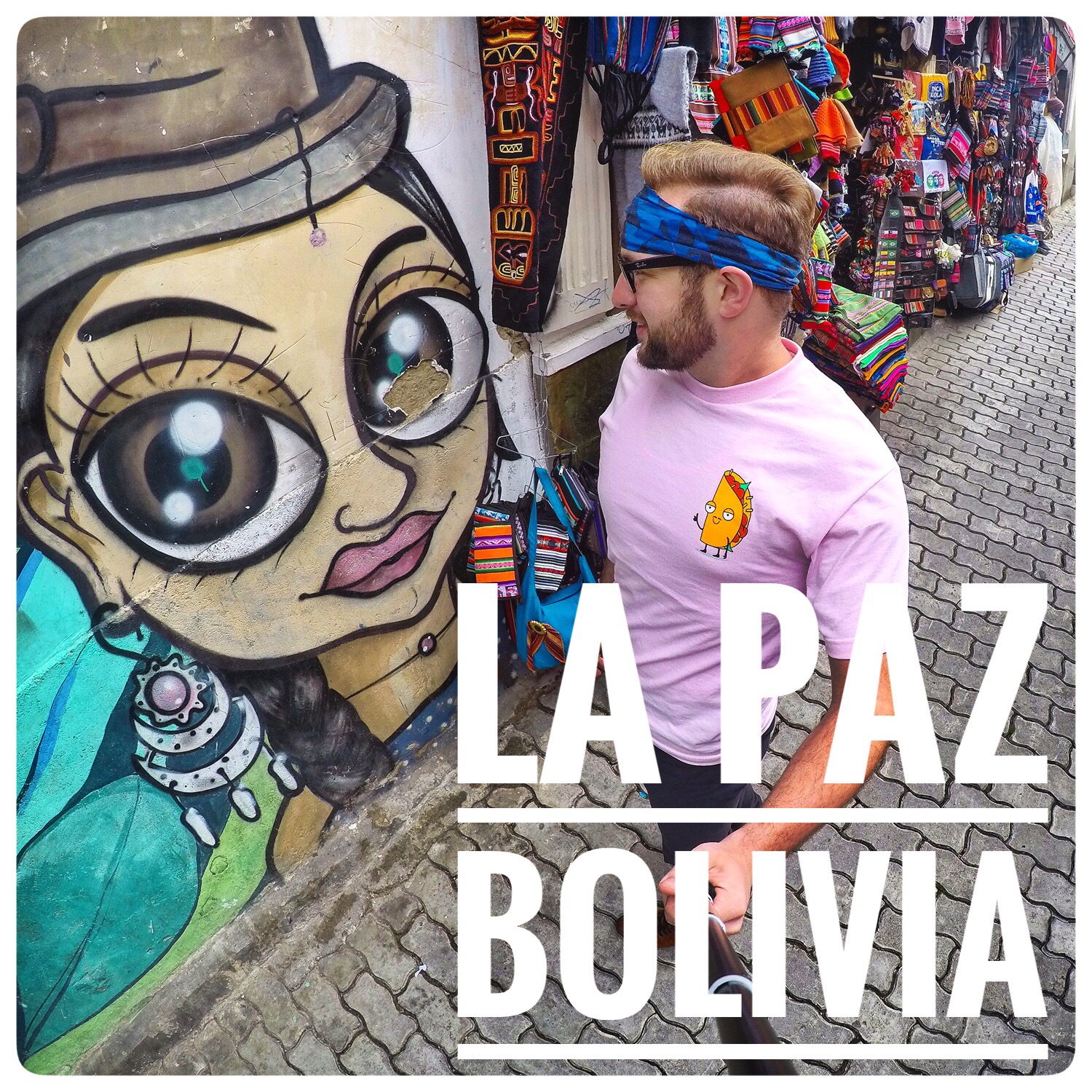 La Paz is a beautiful, historic, and cultural South American city that needs to be on every backpackers’ itinerary during their travels. Walking around La Paz at first might give you the impression that it’s just another large city in South America, but the more you spend exploring the city with its many markets and sights will gain you a realization of its cultural beauty.
Geography:
La Paz is located in the Altiplano (high plain) of west central Bolivia approximately 68km from Lake Titicaca. Many backpackers continue their travels through South America with a bus ride from Cusco, Peru through Puno and cross the border at Copacabana on their way to La Paz; some fly directly into La Paz’s El Alto International Airport. La Paz sits at approximately 3,650m (11,975ft) elevation which can definitely be felt as you walk up and down the steep streets of La Paz. Relax the first few days and enjoy the coca leaves and tea.

La Paz is nestled into a valley and overlooked by Illimani, the highest mountain in western Bolivia (6,438m / 21,122ft). This area of Bolivia has a highland climate including rainy summers and dry winters. The rain that I experienced while there in the summer is brief but heavy. It doesn’t rain the entire day but during the brief time that it does, it pours so make sure you bring an umbrella. I still remember walking around while it was lightly raining and thinking I would be fine. The rain fell harder and I kept walking down the steps into the city not realizing that I would need to walk back up all those steps both out of breath and wet.

Government:
La Paz is the legislative capitol of the Plurinational State of Bolivia while Sucre is the main executive and consitutional capitol. It is the third most populous city with around 877,000 residents in the city after Santa Cruz and El Alto although the La Paz metro urban area is the largest in all of Bolivia with a population of roughly 2.3 million residents. The current president, Evo Morales, is in his third consecutive term. This is upsetting to some Bolivian citizens as their constitution allows only two terms. Towards the end of his second term, Morales changed the country name from Republic of Bolivia to the Plurinational State of Bolivia and was allowed to run for the presidency again as the name of the nation was different and he was never president under the new name.
Speaking of bureaucracy; let’s talk about the San Pedro Prison. Bolivia is a guilty until proven innocent country so if caught you can expect to spend eight years in La Paz’ largest prison, San Pedro, before having a trial. After the trial, the previous eight years does not apply to whatever sentence you get. The jail is run by the inmates. That is correct, the inmates run the jail. They hold regular elections to get representatives for themselves. The prisoners also pay rent for their cells which keep the elected officials maintaining law and order inside the prison. The prisoners have various jobs that allow them to make money in order to pay “rent”. The families of prisoners also live in the cells but the wives and kids are allowed to leave for school and work daily. There are around 1,600 prisoners that reside in San Pedro along with their families so as you can imagine the prison is very overpopulated. Politicians and drug lords can afford luxury cells while the majority live in basic single cells. Many think the prison is a better democracy than the country of Bolivia. Also another fun fact of the prison is that they have a contract with Coca-Cola. Coca-Cola send the prison tables, chairs, umbrellas for the exclusive right to advertise and sell Coca-Cola brand drinks within the prison. I was content with just observing this prison from the outside and moving away from it as soon as possible in order to not somehow end up walking inside it and getting stuck which has happened to other tourists.
Hostels:
The three most popular hostels are: Wild Rover, Loki, and Adventure Brew. We stayed at Wild Rover Hostel and it was a blast. Known as a party hostel, it definitely did not disappoint.

We were there during Australia Day so the fun was at an all time high every day. Australian passport holders stay for free at Wild Rover on Australia Day which in turn packed the premises with ‘Stralyans. The staff was very nice and accommodating and the bar/restaurant featured plenty of drinks and food (check out the beef stir fry on the menu). Be advised this is a party hostel and it does live up to it nightly. The hostel also offers a “free” city walking tour.
“Free” City Walking Tour:
The term free can be considered an alternative fact. While it was at one point free, the government put a ban on free tourism events so they do charge a very minimal fee and it is aboslutely worth it! Red Cap City Tours do a fantastic job explaining the culture and historical landmarks of La Paz that I will further explain. A guide from the walking tour will meet you at the hostel and then take you to the main sights and explain local culture.
Witches Market:
Referred to as “El Mercado de las Brujas”, the witches market is a popular attraction to many tourists. Local witch doctors sell potions for every possible ache you can think of. Many of the powders ensure luck, beauty, and fertility. They also sell dead llama fetus’. According to old Bolivian native religion, which has a focus on the Earth, for every construction of home or building the builders need to give back to the Earth since they are digging up the ground. When they take a part of the Earth away many people will bury a dead llama fetus to give back. They do not kill any llamas for this, they all die from natural causes. It is definitely a great experience to walk through the witches market. Walking through the witches market, you are not hassled to purchase items. The shop owners/workers simply engage into conversation about how your life is going and what could be better. They help explain absolutely everything from the miniature statues to certain remedies they have that could help you get whatever it is you are seeking. I did not purchase anything as I was just happy to be traveling and did not think I needed any remedies. However, if you do have your eye on a special someone, I suggest purchasing the “Follow Me” dust. Simply follow behind the person you wish to notice you and sprinkle them with your best salt bae impersonation and the dust will attract the person to you. I did not try it as I was confident enough in my alpaca sweater and headband look so I’ll let you be the judge to see if it works or not.

San Francisco Church:
Located in La Paz’ city center, the Basilica of San Francisco is the main catholic church. Originally built in the 1500s, it collapsed in 1610 and was again rebuilt in 1784. The most important part of this church is that it blends native and Catholic art. The street in front of the church was the divide between the Spanish explorers and the native people of the region when this area was being explored. One side features more Spanish architecture while the other side maintains native culture. When the church collapsed, the rebuilding featured natives and the Spanish working collectively; bringing the area together and creating a beautiful church featuring amazing art. This is a large gathering area in town for locals with many markets and shops around the church.
Mi Teleferico:
This is the La Paz-El Alto cable car system. Opened in 2014, it helped lower massive bus traffic between the two cities. Currently it has three lines in operation with several more in the planning stage. It is a very fast and clean energy way to get between La Paz and El Alto. Hop on once and receive amazing view of La Paz from above. A one way ticket will cost you three bolivianos ($0.43 USD). I went on the red line with a group from the hostel just to check out the views of the city and it was a very fun trip. A short taxi ride from Wild Rover Hostel, it is worth it to live the local lifestyle and commute inside one of the cable cars. It takes just a few minutes to get to the top of El Alto and can be an enjoyable sight to see as a tourist.

For the true adventurers: BIKE THE DEATH ROAD
The Death Road, also known as Yungas Road, is a 64km stretch of road from La Paz to Coroico. In 1995, the road earned the title “world’s most dangerous road”. The single lane 3m (10ft) wide road has very few guard rails with cliffs up to 600m (2000ft) that drop straight down. The road has not been used for vehicle traffic since 2006, because there was a newer, safer, and paved road built from La Paz to Coroico. Many backpackers and thrill seekers sign up with a travel agency to mountain bike down this road nowadays. I did it and it was an amazing mountain bike ride. The first 20km is on the newer paved road which is easy to ride down on. After the 20km paved section comes a short bus ride up a hill to begin the remainder of the old gravel road down. The cliffs, curvy roads, and views are breathtaking. A must do! This was so much fun riding alongside all my hostel mates. Separating from the pack with other guys, since of course we had to turn everything into a race. I still look back on it and agree it was one of the most fun tours that I’ve done in my life. Careful doing this in rainy season as landslides are common. Once we finished biking, we were taken to a hotel for a nice lunch/dinner before driving back to La Paz. On our way back, we were stuck overnight due to a landslide and cleanup efforts under way. Aside from the overnight delay, the bike ride was amazing!

With its many options for tourists and backpackers alike, La Paz is a very vibrant and cultural city that you can spend a few days in before you head down to the Salar de Uyuni and see the salt flats. Also, as a personal favorite go have a cup of coffee with cake at “The Writer’s Coffee” in La Paz. It’s only a couple blocks away from Wild Rover and it will not disappoint you!
P.S. Americans – be prepared so you do not have a difficult time at Bolivian customs. Print off hostel reservations, flight/ bus information out of Bolivia, itineraries, and make sure you have $160 USD in cash with no cuts in the bills for the visa you obtain on arrival (bring back up $20 just in case, they are quite particular),  extra copies of your passport photo and yellow fever vaccination proof.
More to read about Bolivia, check out our other blogs
-16.489689-68.1192936