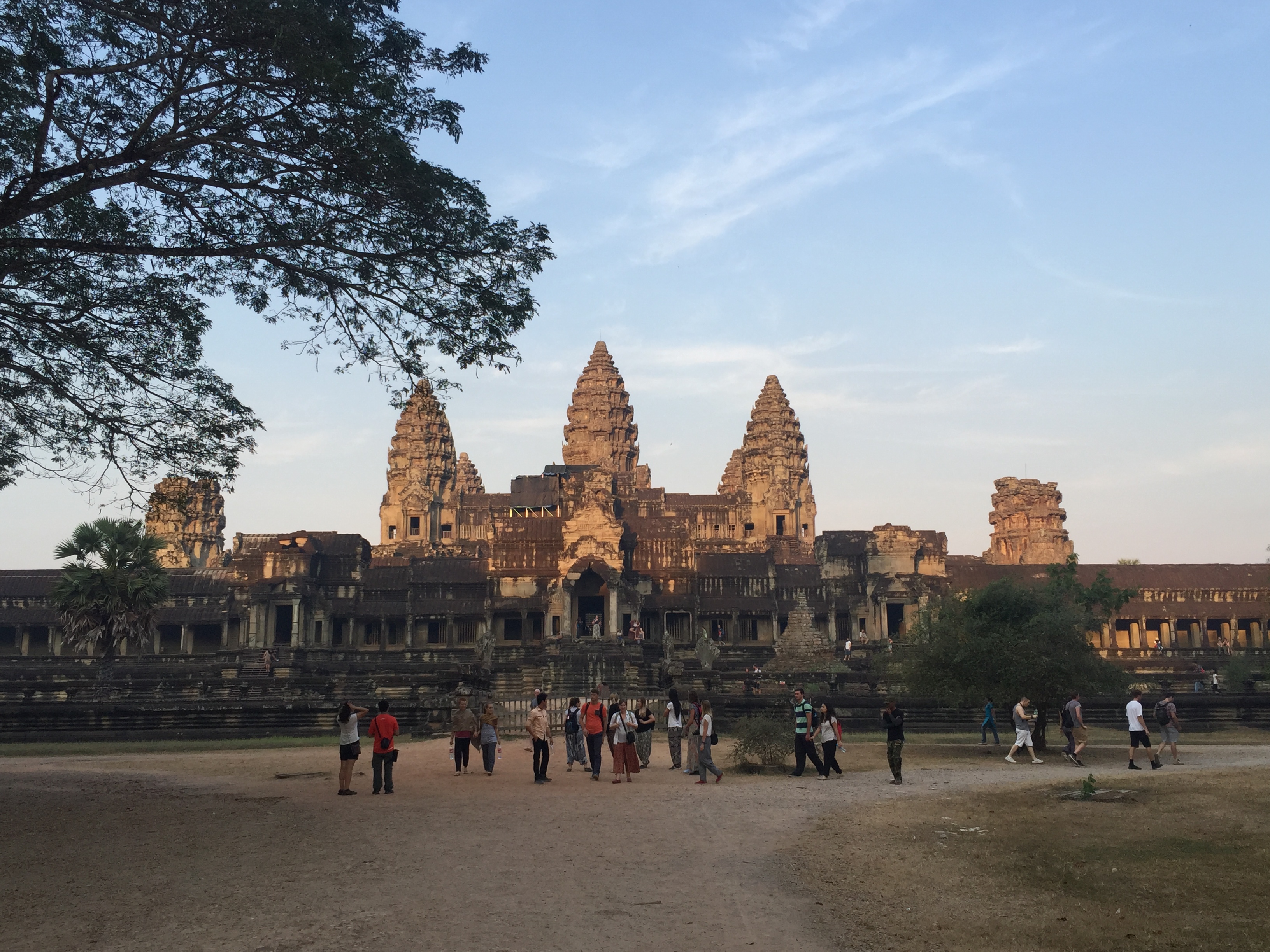 As much as I love traveling in a large group, you get to see things from a much different perspective when traveling with only one or two other people. I was fortunate to experience Angkor Wat this way, one of the world’s most beautiful sites, which is how I suppose the universe intended. Touching down in Cambodia at the end of a very long backpacking trip through Asia, my party light was extinguished, and it was time to be spiritual and calm to see one of Buddhism’s largest monuments. Don’t get me wrong though, I still had a complimentary beer on the flight from Bangkok.

Cambodia has one of the most efficient visa processes in the world. Utilizing a visa upon arrival program, with an assembly line that made me shiver; I thrive on efficiency. The visa forms are dispensed on the in-bound flight. Because we had done our research, we had our $35 and passport pictures ready. We were in and out in less than 15 minutes— on-ward to fun! Strategizing properly for once in our lives, we hit the ATM asap since we were in need of local currency, as they don’t take Thai baht in Cambodia. What they do take is USD. Seriously, it’s actually preferred. The ATMs offer the option to choose between Cambodian Riel or USD. Choose $$$, as everywhere accepts the Riel, but we definitely got some disapproving looks.

For accommodation we choose the Damnak Kunthea Villa, which had an amazing pool and balcony area, so we could secure our tans before flying back to NYC. The hotel provided a complimentary shuttle from the airport, which is where we met Mr. Makara, who was soon to become our new best friend. After settling in at Viva Restaurant, we sat down to plan our next few days. They had a margarita happy hour, so we ordered drinks and nachos and got our google on.

Guided fancy tours for Angkor Wat were far out of our price range. The best way to visit the site is to hire a tuk tuk driver for the day. Our hotel offered the services of Mr. Makara and we determined this was the best option within our budget, plus his tuk tuk was pretty. Two options were offered: the extended tour and the short tour. But the short tour still covered a great deal of ground and most of the important ruins. My memory is fuzzy from a year of beer, but I believe the cost for the short tour was $20-25 with an additional $5 for the sunrise tour. Trust me, pay the extra $5 and get out of bed for the sunrise over Angkor Wat! I know you are tired, but stop drinking buckets early for one night and see some culture. If I can, so can you!!

With an incredibly early morning planned, we opted for a namaste evening of shopping, massages and exploring the city. Stumbling upon Charley’s, we decided to have a quick night cap before heading to bed. While it doesn’t seem like much from the outside, once inside you definitely feel the western influence on this bar. Don’t judge; after a month of Southeast Asia we were ready for something that felt more like home. Much to our delight sparkling wine was on the menu for $2.50. I love bubbles! A recent Buzzfeed quiz told me that if I was a drink, I would be champagne. I accept this.

The next morning before the sun even considered peaking over the horizon we were out of bed and meeting up with Mr. Makara. The hotel staff had packed us a to-go breakfast and we set off in the dark towards Angkor Wat. Since Angkor Wat is considered a sacred Buddhist temple it is important to keep in mind the attire you choose for that day. It is highly offensive to wear reveling clothing or show an excessive amount of skin. Ladies this means no tank tops, a short sleeve shirt works nicely or bring a pashmina to cover the shoulders. Short dresses and shorts are prohibited as well.

We soon realized half of the other tourists in Siem Reap had the same plan to see the sunrise that morning and we joined a convoy of tuk tuks headed down the road. At the entrance of the Angkor Wat complex, you are required to pay the $20/pp entrance fee into the ruins. Discounted 3 and 7 day passes are available. Be forewarned, the entrance fee to Angkor Wat will rise to $37 for the day pass as of February 2017. This process was a complete mess and several lines of anxious tourists spiraled backwards, creating a huge crowd. Angkor Wat entrance fees must be paid in cash and once again, they want those green USD.

A throng of activity welcomes you as the tuk tuk pulls up to the parking area near the big temple. Mr Makara dropped us off and pointed to the general location where we could find him later. Thank God that tuk tuk was an easy to spot bright green. With the crowd, we crept through the dark towards the Grand Temple. In hindsight a flashlight would be a useful tool to stash in the day bag. Luckily the iPhone has a fantastic flashlight function and in unison our cell phones lit the path.

We all settled down next to a lake forward of the main ruins and waited for the sun to creep over the horizon. The sky began to lighten and highlight the ruins in pinks and oranges with hints of purple, creating a beautiful outline of the temple against the sky, which soon faded into a blue as then the sun poked over the horizon. With the sun now shining over the landscape we set out to explore the ruins, starting with the main temple. The architecture of this ancient structure is fascinating, considering the intricate detail they used with such little technology. I mean, they didn’t even have an iPhone flashlight.

After getting all the Instagram worthy photos we needed from this temple, we retraced our steps to the parking lot and found Mr. Makara napping in a hammock rigged up on the tuk tuk; not a bad way to kill time. We set off for the next part of the tour and while interesting and wonderful, all the temples began to run together. The day had grown hot, plus this ancient culure seemed to have a thing for stairs. Towards the end, we were more delighted by the stray dogs napping in the street.

Exhausted and sweaty after a long morning, it was time for lunch and a beer. By this time we had been exploring for about 6 hours. Honestly, unless you’re a history enthusiast or that person who must see everything, the half day tour will suffice. It gets hot midday and the exhaustion of getting up at 4 am and climbing a million steps will inevitably get to you. I was highly impressed by the precision of the architecture, the details of the faces depicting ancient gods and the sheer size of these temples, but I really like lunch too. Even after a month in southeast Asia, spring rolls never get old and we washed them down with the local beer. It was time for our afternoon nap and we headed back to town to succumb to exhaustion.

Read about the Angkor Wat after party in part 2, exploring Siem Reap

One thought on “Cambodia”