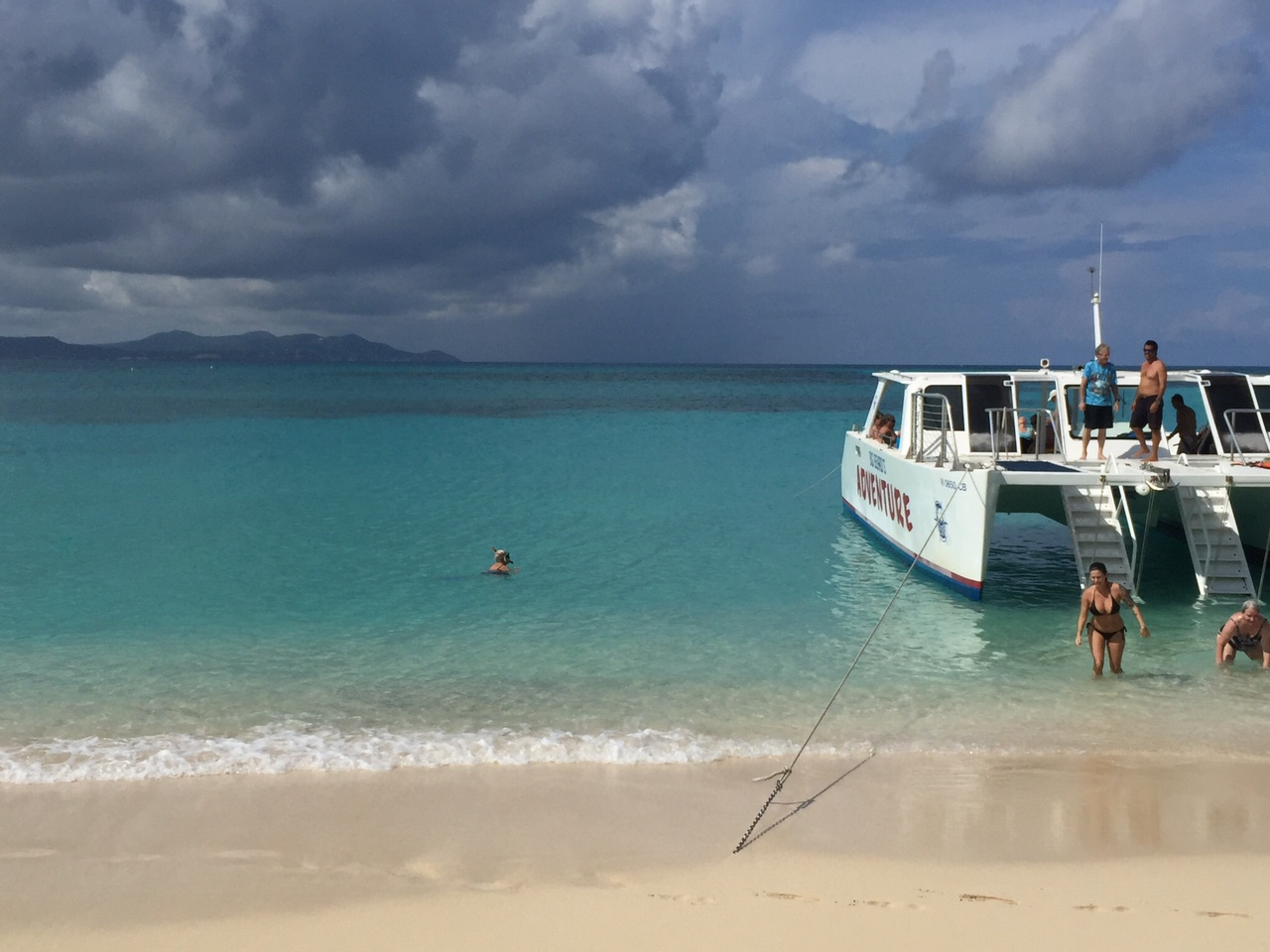 Day 3
The next morning we slept in late, wanting to take it easy. We decided to take the Jeep out and attempt an off road trail through the rainforest. We gave it our best attempt but because of recent rains we hit a roadblock in the form of a giant puddle. I almost said, rev her up and hit it full speed! But common sense prevailed and I test waded out into the middle and it was a quicksand trap that sucked you in, so we backed up and headed back for the main road. The views from the mountain tops on the western side of the island are simply spectacular, and I suggest a leisurely day of driving, stopping here and there to snorkel and hike, and visit beach bars.

The best part of the day was when we stopped for lunch and a few beers and found ourselves pulling into a place called Mt. Pelier Hut Domino Club, otherwise known as “the Pig Place.” Its on Route 76 in the rainforest, famous for hearty beef stew with vegetables, their fish stew and shark bake. Shark bake is a local Caribbean dish that is a johnnycake filled with fried shark meat and you add spiced vegetables. Ryan is the bartender, and her specialty is Bushwackers, a mudslide-like alcoholic concoction made from Mamawama, a local rum creme liquor found only on St. Croix. I was just exclaiming in delight over my Bushwacker when Ryan asked us if we were there to feed beers to the pigs. Well this I HAD to go see! Apparently these pigs love their beer but after a drunken pig riot, they had to keep it non-alcoholic. It’s $1 per person to go feed the pigs and $2 per can of O’Douls beer. We walked over to the pig enclosure and found that these very large friendly hogs absolutely love to guzzle down beer, crunch the can until it’s completely empty before spitting it onto the ground and begging for another. It was astonishing and hilarious! Kids would love it.

Next we went to the famous Captain Morgan rum distillery to do a tour. We had the whole place to ourselves at 2:00 pm, so we got an awesome private tour and then several free drinks at the bar afterwards. We left with a happy buzz!
Next we drove out to the eastern tip of the island to see Point Udall, the easternmost point in the United States. It sees sunrise first before any other point in the US, so in the year 2000, they built a large sundial called the Millennial Monument to mark the azimuth of that first sunrise into the new millennium.
On our way back home to Christiansted we stopped in Castaways off route 82. They have really great pizza, and over more drinks, we started talking to the local Coast Guard guys. They persuaded us to stay and play bingo, starting at 7 pm. Apparently, bingo draws a big crowd on St Croix, and on Thursday nights the biggest shindig in town is Disco Bingo at the Deep End bar on the Tamarind Resort.

Day 4
Thursday morning we were up early, excited to grab our snorkeling gear and head over to the Big Beard’s Adventures boat tied up to the boardwalk. It was $105/person for a full days excursion over to Buck Island with lunch and rum drinks included. Our first stop on Buck Island was Turtle Beach, a pristine white beach, perfect for snorkeling. While swimming in the shallow blue water we spotted a couple of manta rays. Next we sailed over to the opposite side of the island and anchored near the coral reefs. Buck Island Reef National Monument was created in 1961 by President Kennedy to protect the fragile marine flora and fauna. This coral reef ecosystem is one of the finest marine gardens in the Caribbean. Donning blow up life vests so that we would float easier, we were informed to please not touch or harm any of the coral and to follow our guide along the underwater trail. Swimming with fish of every color in the rainbow, among some of the most beautiful coral formations I’ve ever seen was quite an experience. The ninja masks really enable you to get a proper 180 degree view. Back on the boat with rum runners in hand, we left the Buck Island area and found a secluded cove closer to St Croix where everyone disembarked for lunch. The Big Beards crew had a picnic area with tables and a grill set up under the trees. The lunch spread included hotdogs, hamburgers, grilled fish and chips. There was a family of mongooses that lived among the trees and Captain Mike had them trained to eat bits of food straight from his hand. He called them Pete and Repeat. After lunch we had more time to relax on the beach, swimming and enjoying the sunshine. Ben and I even found empty turtle nests where the mother sea turtles had hatched their babies!
Once we returned to Christiansted, we settled in for an afternoon nap while a light rain passed. We decided that since it was our last night on the island, we would get dressed up for a fancy dinner and then check out more pubs along the boardwalk. I wanted to go eat dinner at the Bombay Club because I loved the outside architecture of the cozy traditional building. The inside was just as inviting, very much like a pub, and we had a three-cornered booth all to ourselves. I had the lobster bisque and stuffed crab, and Ben had a lobster stuffed quesadilla that he raved about. We shared everything but it ended up being so much more food than we could manage that we boxed it all up and gave it to a homeless guy we had made friends with outside the Customs House.
After that we finished up our night with more drinks and music at the Irish pub in town called Tavern 1844 so that Ben could watch the Saints game. They had an excellent selection in private stock rum as Ben can happily attest!

Day 5
Friday was our last day, and after stopping in Twin Cities Coffee Shop for our morning coffee we did a little souvenir shopping. Ben had some beautiful tri-tone bracelets engraved at a lovely boutique jewelry store on Queens Cross St called Joyia Inspirational Jewelry. Her store smells heavenly of jasmine. Since it was lunchtime and we still had a few hours to kill before our flight home, we stopped by the La Reine Chicken Shack one last time. It was the only place we were able to eat at twice and it was worth it! It’s an open air roadside stand near the corner of routes 75 and 70, selling the most delectable finger-licking fried chicken you get can get your hands on in St. Croix. Actually I’m not sure I can think of any better chicken place in the world. The 1/2 chicken and 2 johnnycake special is only $7, and the johnnycakes are made of sweet bread that simply melts in your mouth.
After lunch we headed down to see the St George Estate Botanical Garden. It was once an old sugar cane plantation, and it currently operates as a museum. It took us about 45 minutes to walk around the whole area. I especially loved the Unusual Trees section, particularly the Sandpaper Tree where the bark was covered in tiny sharp spikes. The medicinal herb garden was very fascinating, I learned about all the great healing properties of periwinkle and the Noni fruit.
Word of advice about leaving St. Croix: get to the airport 2 hours before your flight! Turning in the rental car to Centerline Rentals was quick and easy, because afterwards they drop you off at the terminal. But there are a lot of little extra steps involving US customs (even though it’s a “domestic” flight), and the agriculture security screening process that require additional time. And all the TSA agents are definitely on island time.
Everywhere we went, people were super welcoming and offering all kinds of local tips and advice. We drank our weight in rum. The only thing expensive about St Croix is the cost of food, everything else is quite reasonable. I’m glad we went in the off season when it wasn’t super packed and we were relaxed, having lots of places all to ourselves. Service was never rushed, and always extremely courteous and friendly. The views are beautiful and there is so much to do and explore. Overall, it was an amazing vacation to St. Croix, I left with a fresh island tan and incredible memories. I can’t wait to come back!