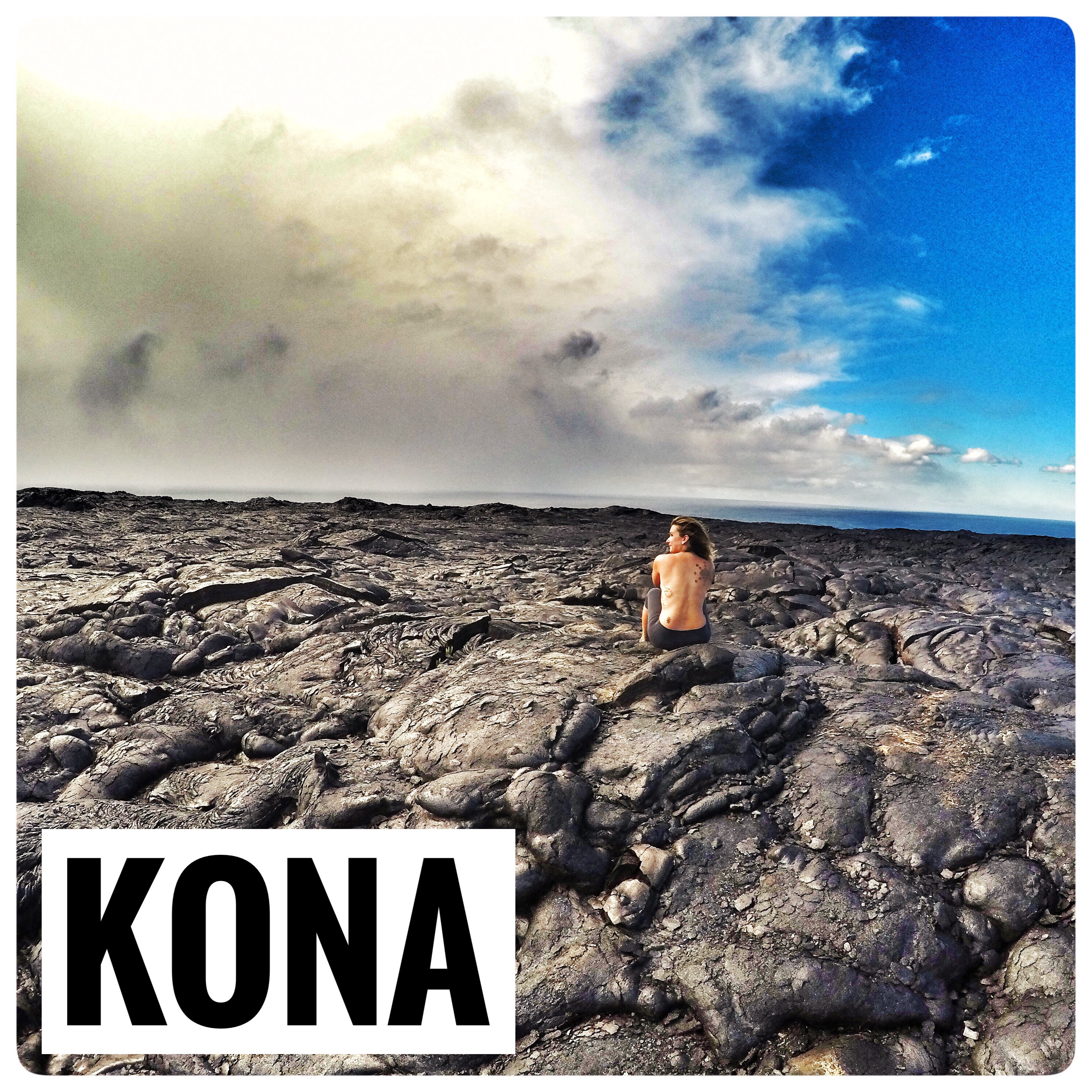 Hawaii is well known for being a place of physical, spiritual, and mental healing. The moment you touch the ground, you understand it’s special… it’s in the air. It’s no wonder why I’m drawn to the islands in specific moments of need. I first flew to Kona after being out of work for an injury. The big island just seems to pull me out of my comfort zone in just the right way and also is sometimes just the quiet sanctuary I’ve needed to heal in a more personal way. It presents both the adventurous and meditative side. I’ve had a lot of travel firsts here: I swam with my first sea turtle, ate fish and eggs for breakfast, marveled at the size of manta rays, tried poke and made countless memories.
You wouldn’t know it outwardly, but sometimes I battle with anxiety. I have my comfort zones with my travel group, as they are the cushion I can fall back on– my travel partners in crime. They get me going for that afternoon adventure, they make sure I don’t sleep through flight departures.

Anxiety hit me hard one morning and I was traveling alone on this particular day. I had my heart set on renting a scooter to see more of the island. With the time change, I woke up with the sunrise and I trailed down to the beach with my coffee to listen to the ocean and practice yoga. I was trying to find my own strength but still listening to the inner voice of fear and doubt. I texted my friends from home who gave me words of encouragement. I believe it was something like “You are Julie! Do it!” They had a point. I am Julie. Not always sure what that means but it felt important at that moment and for some reason, it worked. Sometimes you just need that extra push from your support group.

DCIM100GOPROGOPR6212.
I have never rented a scooter alone although I’ve sat on the back of a fair amount. I arrived at Sunshine Rentals in town and they asked if I’ve ridden one before… (insert awkward facial expression emoji here), this was not a lie. He asked if I felt comfortable… I admitted I was nervous. He showed me the general layout and asked if I wanted to practice in the parking lot. I really didn’t want any witnesses for the hot mess that was about to happen so I told him I’d be fine and thanked him for his help. I said a little prayer and was so thankful that I got to try this in Hawaii instead of Asia, where they aren’t as forgiving to newbie drivers. I needed the beginner level of chill places to attempt to drive a surprisingly heavy scooter that is considerably larger than my pocket-sized little frame.

I wanted to explore the cliffs in Kahaluu-Keauhou. Nicknamed “The End of the World,” I was immediately enticed to add that to my list of unique places. Kuamo’o Bay is an ancient burial ground where old and new traditions battled. Traditionalists lost the war and with that so did the old ways which makes it a perfect place to meditate and say farewell to old inner feelings. I spent a fair amount of time watching the waves crash off the jagged lava cliffs and wondered why anyone would ever consider diving off them just for fun. I’m not at that level of adrenaline seeker just yet.

I’m so grateful that everyone is on island pace, which allowed me plenty of time and space to get used to this new method of transportation. Before I knew it, I was zipping around the island with the wind in my hair and Led Zeppelin blasting in one earbud (safety first!) with the biggest and dumbest smile ever. I can’t express the pride and joy I felt from conquering my fears. I had no intentions of returning the bike until the last minute. I zipped up the empty roads and up the mountain as far as my literal little engine could take me, before heading back down the road and passed the airport (just for the love of the open road). I finally returned my little scooter with a great sense of accomplishment and pride.

Eventually my friend joined me on the island and we decided to rent a car and drive from our hotel in the middle of the night to the other side of the island to catch the sunrise over the active volcano, Mauna Loa. We left our hotel around 3am with food and beverage provisions for the day to save time and money. Accompanied by our favorite Backstreet Boys Spotify playlist, we powered through the 190 “highway” with some of the craziest fog, rain and hairy turns in a pitch black night that makes a teenage girls emotions seem like the calmest storm. At some point in the dense fog patches, I was fairly convinced that an actual Sasquatch would cross the road and make eye contact with us in slow motion, just like the movies.

We made it to the top of Mauna Loa just in time for sunrise and it was surprisingly more chilly than we had anticipated. We had brought leggings and sweaters and sneakers but that wasn’t nearly enough. Freezing aside, we took in the view of the sun rising in the distance competing its bright orange hues with the sparks and glow from the lava. As the sun rose we could see more clearly the black rocks and the new springs of life sprouting through. As the fire goddess, Pele, believed that through fire and death, new life can be born; we took a moment to breath in the new and exhale the old.

We hopped in the car and turned the heat and the music on full blast with the hopes to defrost and rehash a plan to see some of that lava up close. The drive is absolutely spectacular! There are signs along the way with the years clearly posted where lava had reached at the time, keeping things in perspective that we were on a real active volcano and those dates weren’t actually that long ago.

Now, I’ll be honest, we did do a bit of research about the best way to get closest to the lava but bound and determined to be independent women we decided to do this alone, so we just drove the winding paths. We came to a sign where the car paths end and the walking paths begin. There was a sign indicating it would be a 5 mile walk that day to see lava; but we could see the smoke stack from where the lava was flowing into the ocean and it seemed so close. We walked for hours on loose lava rocks and seemed to not be getting any closer. At some point, we ran into a German couple and their guide and they informed us we had another solid 3 miles to go one way, and being on a time constraint as it was, we knew we would be getting back when it was dark and rainy, so we returned back feeling a little defeated with achy muscles. I won’t let that hike get the best of me though, so I can’t wait to start it over again with better provisions, way earlier, and with hopefully better weather conditions (island weather is so unpredictable). Or I’ll just drive around and attack it from the other side which seems much closer on a map in hindsight.

On another day, we had a specific mission which involved a slightly heavier duty vehicle. I’d suggest using all your upgrades and renting the jeeps and the SUVs in Hawaii. Our hotel had provided us with complimentary snorkeling gear and boogie boards, so we were grateful for the extra room in the SUV. We set in search for the sandy paradise I had heard so much about and was beginning to think it didn’t exist, with so much of the island being black rock. Makalawena Beach is about a 30 minute hike through more of that loose gravel-like lava which really does take a toll on your legs and then through paths of sand that make you think you made a wrong turn somewhere. Make sure to bring sneakers! Even in the water, the coral is so sharp and comes out of no where. I fell victim to one of these corals but it didn’t stop me from attempting to catch a few more waves.

Swimming in the ocean and bathing in the sun has been a well known simple and pleasing ancient remedy that doctors often prescribed patients of varying illnesses (also a great hangover cure if you are particularly struggling one day). Salt water cleanses energy, makes your skin soft, cures even the worst moods while regenerating your spirit. Playing in the water all day will also give you a hearty appetite. We saved money by buying sandwich supplies at the grocery store but Hawaii is pretty expensive any way you try and spin it. Bring anything you can from home while adhering to agriculture rules is a must. I understand taking up space in your bag for approved food is annoying when you could be using the space for that cute extra sundress (that I promise you won’t have time to use), but know you will be using that luggage space home for coffee and chocolate souvenirs.

Between the hikes, biking, snorkeling and swimming, the big island of Hawaii will keep your days full and your soul refreshed. Meditate, soak in the spirit of Hawaii, and respect the culture and nature. Remember to reflect often, learn something new and breathe out the old. Way Too Wanderlust recommends stepping outside the box, bringing approved food and alcohol, and upgrading to the SUV.
19.7361734-156.0410607