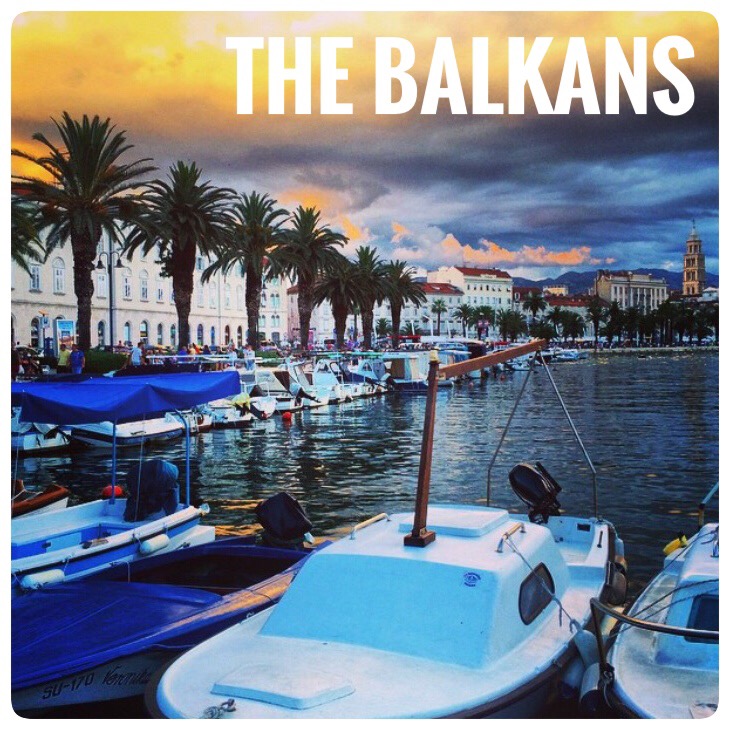 One of the most beautiful areas of the world is the Balkans. Overshadowed much of the 90s and early 2000s by a civil war with the breakup of Yugoslavia, the Balkans are back and now is the time to travel through this historic part of the world. What was once a large nation (Yugoslavia) separated into six nations (Slovenia, Croatia, Bosnia & Herzegovina, Serbia, Montenegro, Macedonia) after the Yugoslav war was officially ended in 2001. These are all safe nations for travelers and backpackers currently and each nation offers its own culture and plenty of sight-seeing. Main way of transportation in the entire area is with buses which are cheap.

In this post, I will focus on Croatia, Bosnia & Herzegovina, and Montenegro.

Things to do: Wander around the old town. Hike to the top of the San Giovanni Castle and witness one of the most picturesque views of the Bay of Kotor.

Place to stay: Hostel Old Town Kotor – In the heart of the old town where you will feel like you’ve just stepped back a thousand years in time. Make sure to reserve in advance if visiting in peak season (May-August). Hostel Nightlife is a must!

Bosnia’s fifth largest city located on the beautiful Neretva River with its iconic Stari Most (Old Bridge). This bridge was destroyed during the Bosnian War in 1993 and rebuilt in 2003. The medieval architecture of this town is a must see while traveling throughout the Balkans.

Things to do: Witness Stari Most (Old Bridge) and watch daredevil jumpers jump into the shallow Neretva River below. Experience the old town and medieval Mostar by walking through its old stone streets and markets. Have dinner at one of the many restaurants overlooking the bridge and river.

Bosnia’s capital and largest city is one of the most historical cities in Europe. The city hosted the 1984 Winter Olympic Games but much of the venues now resemble more of an apocalyptic look with the war destroying much of the venues. There is a bridge located in the center where Gavrilo Princip assassinated Archduke Frank Ferdinand of the Austro-Hungarian Empire which in turn started World War I! It has a very large Istanbul-ish vibe to the city much to its formal rule by the Ottoman Empire.

Things to do: Visit the old and ruined Olympic Venues to really appreciate life. Check out the bridge famous for the assassination of Franz Ferdinand. Wander through the markets in Bascarsija, Sarajevo’s old bazaar and historical center. Look at the many beautiful mosque’s located throughout the city.

Dubrovnik is located at the very southern tip of Croatia bordering the beautiful Adriatic Sea. This is one of the most visited places along the entire Mediterranean and once you arrive you’ll know why. The old town of Dubrovnik features a massive wall around it that captures its once dominant force on the Adriatic.

Where to stay: Hostel & Rooms Ana – Old Town Dubrovnik (enjoy the party) Make sure to reserve a spot before arriving in the peak season as the entire town runs out of rooms. This is located in the heart of old town and Ana is awesome!

Split is another large city located on the Adriatic coastline of Croatia. Split also features an impressive old town with Diocletian’s Palace and Clock Tower being the main sight to witness. This is a major port so a lot of cruises and ferry’s come through here. This is where you will catch a ferry to Hvar Island. This is also home to Ultra Europe Music Festival which gets insane. This is a big backpacker party town and is famous for its legendary pub crawl.

Things to do: Wander throughout the old town. Walk up to the top of the clock tower at Diocletian’s Palace in the old town to get a magnificent 360 view of Split old town and harbor. Hostel Pub Crawl. Sail Croatia/Yacht Week. Ultra Europe Music Festival.

Where to stay: Find and pre-book a hostel in the old town of Split. Take part in the pub crawl.

Things to do: Walk around the lakes. If on a tight schedule focus only on the lower lakes and waterfalls. The upper lakes are great but larger and a little less scenic.

Where to stay: Doable in a day trip. Very long day but worth it. Grab a bus from Split and then once you’re done with the park take another bus up to Zagreb, Croatia’s capital city.

One of Croatia’s most beautiful and most visited islands in the Adriatic. Grab a ferry from Split and get ready to party!

Things to do: Hike to the top of the fort located in Hvar City on the island of Hvar. Wander throughout Hvar’s epic old town and harbor. Start the night with drinks at the hostel, then move to Kiva Bar in old town, then take a water taxi to a small island off of Hvar to continue the night and watch the sunrise at Carpe Diem Club.

Where to stay: Anywhere in Hvar(City) on the island of Hvar. Make sure to pre-book during the peak season (May-August).

Pula is located on the Adriatic in Croatia’s northwestern area called Istria. Pula has a lot of Ancient Rome comparisons due to its close proximity to Venice. Arrive here either via ferry or bus from Venice. If you’ve visited the coliseum in Rome, you’ll have to visit the one in Pula which still hosts concerts and movie festivals! A very historic town as well as many other towns located in the Istria part of Croatia.

Things to do: Walk around the old town. Go inside Pula Arena (coliseum) and explore both above ground and below ground. Sight see throughout the old town famous structures such as the Arch of the Sergii, Golden Gates, and Temple of Augustus. In the summer, grab a local bus and head to Verudela Beach and cliff jump, swim, or just relax. Explore other smaller places throughout Istria.

Where to stay: Find a hostel near the coliseum (Pula Arena) or anywhere in the old town will for sure not disappoint you.

Check out our other blogs about Croatia

2 thoughts on “The Balkans”